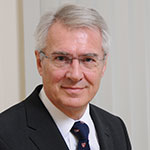 Bill Ribbans is a Trauma and Orthopaedic Surgeon and Professor of Sports Medicine at the University of Northampton. His main surgical interests are Foot and Ankle, Knee and Sports Injuries. He undertook Fellowships in Sheffield and at Harvard before becoming a Consultant at the Royal Free, London in 1991. Five years later he returned to his home town in Northampton where he continues to work. Since 2012, he has been in full-time private practice.

He joined the University of Northampton in 2005 as a Visiting Porfessor in Surgical Sciences. In 2010, he was awarded a Personal Chair in Sports Medicine.

He has been involved in the medical care of elite Sports people since 1981. He is Chief Medical Officer to Northamptonshire CCC, Honorary Surgeon to Northampton Town FC and the English National Ballet. He has worked with numerous sports organisations and international teams as both Surgeon and pitch-side Physician during that time.

Bill has over 140 scientific publications and lectures widely both nationally and internationally.  He has an eclectic range of research interests including outcomes in foot and ankle surgery, the genetics of ligament and tendon injury, Vitamin D activity in the musculoskeletal sphere, cryotherapy in recovery and rehabilitation, the ethics of sports medicine and sports injury surveillance.

An Evaluation of the Effects of Whole Body Cryotherapy (WBC) Treatment for Sports Recovery.

An evidence based classification of hallux rigidus.

Member of the Court of Examiners, The Royal College of Surgeons of England

Vitamin D and Foot and Ankle Trauma: An individual or societal problem?

Ligament Augmentation with the Internal Brace

Variation within the iNOS Gene influences risk of Achilles Tendon Pathology in a British cohort.

Bilateral arthrodesis of the distal tibiofibular joint for deforming osteochondromatas

The Epidemiology, Management, and Outcome of Acute Fractures in Team Sports

The Sharp End of Sport. Injections and the Athlete